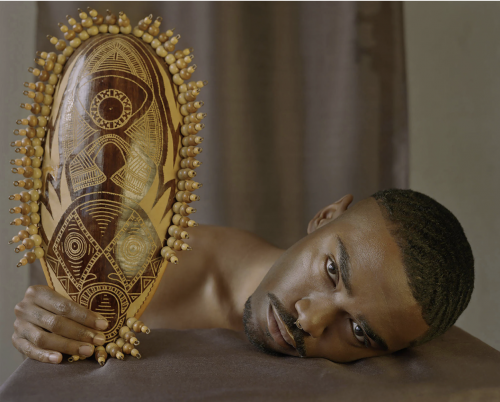 Brooklyn-based photographer John Edmonds is the winner of this year’s Foam Paul Huf Award for young photography talent by the respected Amsterdam gallery. The prestigious award is given annually (since 2007) to a photographer under the age of 35, along with a €20,000 cash prize, a solo show at Foam and a feature in the Talent issue of the gallery’s magazine.

John Edmonds is known for his intimate portraiture exploring themes of “identity, community and desire,” he says, which focuses on the “performative gestures and self-fashioning of young black men on the streets of America”. We wrote about his first monograph back in 2019, titled Higher, after it was named one of Time magazine’s top 25 photobooks of the year. Also in 2019 he was included in the 79th Whitney Biennial.

The Foam jury says in a statement that Edmonds’ work impressed them for its “very articulate, distinctive style and clarity of vision,” that was “seemingly simple but in essence culturally complex”. They add that his work “stems from a deep understanding of the medium of photography and taps into its modernist history”.

“The African art objects he uses have a multi-dimensional nature, but whether they are symbols of traditional African cultural heritage or signifiers of diaspora and memory, they are used to question notions of displacement and dispossession in contemporary society,” the statement continues. “While expanding the tradition of studio portraiture, he thoughtfully reclaims the framing of the past and puts it firmly in our contemporary world, a world in which authenticity and identity are fluid.”

Foam also gave an honourable mention to the work of Guanyu Xu, which tackles sensitive issues of homosexuality and queerness in a Chinese and American context, and “does so with a highly personal and experimental approach,” the gallery adds.

Last year’s winner of the Foam Paul Huf Award was Spanish photographer Laia Abril, for her unflinching documentary-style series on rape titled The History of Misogyny.